June Alexander
The Story behind SOCKIT 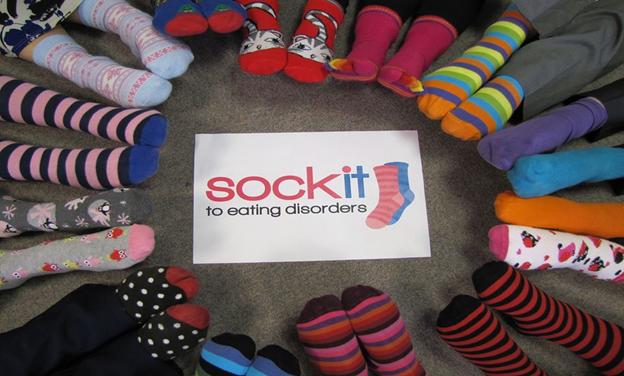 ​While delegates to the 2010 International Conference on Eating Disorders in Salzburg were engrossed in discussing the conference theme of “Moving    Forward Through Transdisciplinary Solutions”, news came of a young woman’s death from the effects of Anorexia Nervosa.

The death of this young woman, Erin Riederer, has given rise to a symbol of hope in the fight against eating disorders.

Sometimes the darkest moment can be a catalyst for light. So it was at the 2010 international conference of the Academy of Eating Disorders in Salzburg, Austria. The sun was shining, it was about 30 degrees, and Laura Collins, Kitty Westin, Carrie Arnold and myself were eating lunch at a small round table under an umbrella outside a sidewalk café. Laura, Kitty and Carrie were from the USA, and I was from Australia. Our shared passion for raising awareness of eating disorders had brought us to this point. Laura and Kitty are mothers who, having experienced the challenge of seeking the right treatment for a child who develops an eating disorder, became activists and lobbyists, and Carrie and I are two writers who, having suffered from eating disorders, are devoted to raising awareness about these illnesses.

Kitty was to present at the international conference on eating disorders that very afternoon. And she was very upset. Not about the inspiring conference, which had attracted 600 researchers, clinicians and people like us from around the world, but about the news she had received from the USA only a short time before. Erin, aged 26, had died. Her death added to the statistics that show Anorexia Nervosa has the highest death rate of any psychiatric illness.

Laura also was visibly upset and angry; angry that Erin’s life had come to this. Any death is one too many.  I’m sure Carrie was thinking as I was, ‘that could have been me’ and how fortunate we were to meet the right people at the right time to believe in us and offer us a lifeline. I don’t believe any of us would remember what we ate for lunch that day. We were as one in feeling for Erin’s long struggle, and that of her parents in seeking the right treatment. We were thinking of Erin’s lost life, and the sadness that forever more would be with her family.  Kitty was striving to regain her composure, for she was to appear on the main stage within 30 minutes, and Laura also was to present a workshop later that same afternoon.

We were short on tissues and I rummaged around in my deep leather shoulder bag, seeking one to pass to Kitty to help stem her tears. Instead of pulling out a tissue, however, I pulled out a sock; a sock belonging to my daughter Amanda. I felt embarrassed as, although laundered, the sock was far from sparkling white (it had got mixed up with my grandchildren’s clothes after a visit, and I had intended to give it to Amanda before boarding the plane at Melbourne for Salzburg).

The sock, buried in the lower reaches of my bag, had dodged my memory and the airport security cameras, and hitched a free ride to Salzburg.

This was a sock with a purpose.

Tentatively I offered it to Kitty, and she took it gratefully. It was one of those anklet sport socks with toweling inside, so was quite soft and ‘squeeze-able’. Kitty dabbed her eyes and clutched the sock. Somehow it was giving her comfort. When the time came for us to head back to the conference centre, where Kitty would bravely walk on to the stage, she asked if she could take the sock with her.
‘Of course,’ I said. Kitty made a great speech. Her courage was immense.

After the conference, I headed home to Australia and Kitty, Laura and Carrie headed home to the US. Susan Ringwood, who was heading home to the UK where she is head of BEAT, the UK’s largest non-profit eating disorder charity, also was very much part of our support circle. The sock hitched another free ride, this time to the USA with Kitty.

When I told my daughter Amanda about her well-traveled sock and its role at the eating disorder conference in Salzburg, and of its new home in the US, she was delighted that although not there herself, her sock had helped lighten and overcome a deeply emotional and sad moment.

Kitty then wrote to say the Crying Sock, as she termed it during this poignant time, (Kitty’s daughter Anna died in 2000 after struggling with Anorexia for five years), was accompanying her to the celebration of Erin’s life. The sock, in its comforting role, was attending Erin’s funeral.
The sock was fast becoming a symbol of all that we hope to achieve in raising awareness of and treating eating disorders. It is an item that every member of the family wears (a reminder that eating disorders affect every member of the family), and that in its various forms appeals to all ages; it is an item that is comforting; that can be worn for warmth; that can be cuddled and squeezed, can dry tears and absorb the release of intense emotion; that can be washed, carried anywhere and everywhere; that can offer hope when confined to bed and can spread the word when walking down the street, playing sport or marching on government.

Erin’s lost life has given birth to the ‘sock’ symbol. Erin’s mother Joan and family have given their permission for creation of a symbol to be known as Erin’s Sock of Hope. A small international committee of ‘socksters’ has been formed to establish Erin’s Sock of Hope as a global symbol of eating disorders. Erin’s spirit, and that of all who have lost their lives to eating disorders, will live on through the sock and give hope to others.

The eating disorder field will benefit in numerous ways from the creation of an easily recognisable and identifiable symbol to unite efforts in raising awareness around the world, and the serendipity that produced the Crying Sock, now Erin’s Sock of Hope, is a sure sign that the sock is meant to be.

SOCKIT to ED has become a call to ACTION!!
http://kmbforanswers.org/

We Need Your Support Today!